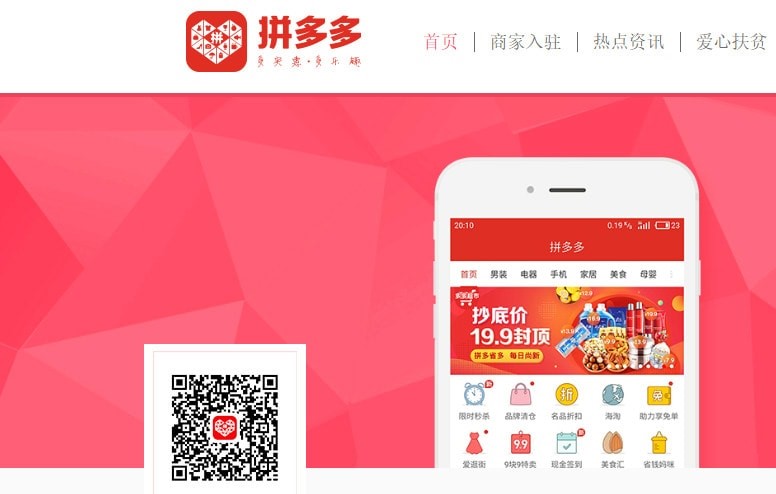 E-commerce in China is a phenomenon in full development, which becomes more relevant every day in economic terms.

Among the possible Apps to choose from, Pinduoduo has distinguished itself in recent years. An application that, thanks to its advantageous offers, is especially loved in third and fourth-tier cities.

Pinduoduo is an e-commerce platform allowing users to participate in group buying deals. In fact, a large part of Pinduoduo’s appeal is the group buying function where the more people who buy a product lead to a lower price.

This Chinese eCommerce platform has seen explosive growth since its launch in 2015, becoming the third-largest e-commerce player behind Alibaba and JD.com in China and now outranking JD.

Pinduoduo boasts a base of 300 million users. 65% come from third tier cities and only 7.6% come from first tier citied.

Most of the users of Pinduoduo are female, over the age of 40, and live in the third and fourth-tier cities. It is a price-sensitive target, which makes frequent purchases and often for the whole family. Users who do not have much experience with e-commerce, but who once known the medium could bring high long-term profits.

Unlike other e-commerce apps such as JD.com or Taobao, it has decided to focus on small towns. Its strength is also to be found in incredibly low prices. This policy has made it possible to attract low-income families to the App.

What led Pinduoduo to succeed?

The explosive growth of Pinduoduo in recent years is due to the considerable funding received, such as that of Tencent and IDG in 2016 of the value of 110 million dollars, to its ability to take hold in the smaller cities, but above all to its marketing strategy that has brought the app to grow exponentially in no time.

Pinduoduo’s strategy for success is based on two main concepts: addiction and virality. All the marketing strategies adopted push users to share the App with friends, subsequently obliging them to always remain active.

When a user selects an item on Pinduoduo, they can choose to buy it at the official price or participate in group buying to access the discounted price.

In order to access the discounted price, you must find at least one friend to join in the purchase. This encourages buyers to share links to the item they are buying with friends and family or over social media.

The idea is to involve as many users as possible in a purchase: the greater the number of people involved, the lower the price.

So if by hypothesis a user had a very large number of friends willing to help him, he could almost have a free product. This may seem counterproductive, but in reality it is an excellent strategy for expanding the public and making them aware of the brand.

For each user who thanks to another follows the official account, installs the App or registers via Wechat, the former can receive a long series of free products.

As everyone in China, Pinduoduo also offers many discount coupons. Unlike other platforms, Pinduoduo coupons have a very short duration, typically 2 hours. This strategy is very clever because it pushes you to shop instinctively, not to linger, and to always be active in the App. So to stay updated on all offers.

Like many platforms, Pinduoduo also offers cash prizes to those who invite friends to sign up for the App. Unlike the others, Pinduoduo has created a public ranking of the most awarded users, in which you can see the amount of their prize pool.

As in normal sweepstakes there is a product up for grabs, and to win it you must register. The operation is very simple: to participate in the lottery you pay a very low registration fee (0.01 RMB). You must then invite friends to participate and if there are enough members within the time limit the winner is drawn.

If the minimum entry fee is not reached, the lottery is canceled. The registration fee is returned to all those who do not win and a coupon is given to them to be used on Pinduoduo. Sweepstakes help many brands to advertise themselves without high marketing investments.

Official WeChat accounts have a maximum limit of 4 broadcast messages per month, insufficient for aggressive and continuous communication such as that of Pinduoduo. That’s why the e-commerce app has decided to take advantage of customer service messages.

Used primarily to expel requests for assistance, but also to recommend new products and promotions. This is possible thanks to the monitoring of the order history and the fact that the customer service messages are fully customizable.

The main audience of Pinduoduo are adults not used to online shopping. To solve this problem for users, the App takes advantage of the ease of WeChat Pay payment. In practice, the first purchase requires a password, which for subsequent times enables automatic payment without confirmation. In this way the expenses are automatically charged to the WeChat wallet.

A large part of Pinduoduo’s growth has been driven by the fact that it can be accessed on Tencent-owned messaging service WeChat. WeChat is a key part of daily life in China and allows people to make payments within the app. So a buyer can access Pinduoduo via WeChat and make payments there.

Currently, 100% of Pinduoduo’s revenue comes from online marketplace services. This is largely made up of the commission Pinduoduo takes from sales on its platform and the advertising it manages.

While Alibaba derives most of its money from e-commerce, it has other emerging companies such as cloud computing.

Compared to Alibaba, the revenue stream of Pinduoduo is less. Anyway, its revenue is growing faster in percentage terms, in fact, the December quarter, PDD’s revenue reached 10.79 billion yuan ($ 1.55 billion), an increase of 91%.

As we said before, a large part of Pinduoduo’s user base is from smaller Chinese cities where there are perhaps more price-conscious consumers. While Alibaba appears to dominate in the so-called tier 1 cities in China.

Now Alibaba has put a larger focus on gaining ground in these lower-tier cities and has released products to compete with Pinduoduo.

In March, Alibaba launched a special version of its Taobao app that focuses on the so-called customer-to-manufacturer (C2M) model, which has been behind the rise of Pinduoduo.

That’s where consumers can interact and buy direct from the manufacturer rather than going through a third-party seller. Alibaba is building up relationships with factories for the C2M model of business. And with the Alibaba’s strong cloud computing business, the success is almost certain.

Alibaba has strong logistics capabilities (delivering items on the same day or day after), while Pinduoduo logistical capability is not so fast.

Anyway in March, Pinduoduo made a private placement of newly issued Class A ordinary shares for $ 1.1 billion. The company’s funding will help its “strategic flexibility for expansion to offer our users more interactive experiences and good value for money”.

Pinduoduo announced that it would invest in convertible bonds issued by GOME Retail listed in Hong Kong. The investment will see GOME’s product range, logistics, and after-sales support integrated with PDD.

Therefore due to the efforts they both made in improving their marketing model it will be interesting to see the changes they will bring in the future.

Based on the Pinduoduo marketing strategy, How a brand can succeed in the Chinese market?

Buyer traffic to Pinduoduo is generated from word of mouth referrals by its existing buyers as well as the effect of its marketing campaigns.

A big portion of the Company’s buyer traffic comes from its user recommendation or product introduction feature which buyers can share with friends or contacts through social networks such as WeChat and QQ.

Branding through word of mouth

Pinduoduo has filled a gap, has satisfied a need.

In addition,  because of the most of the users of Pinduoduo are price sensitive target, platform allowing users to participate in group buying deals, where the more people who buy a product leads to a lower price. He used discounts as marketing strategy for its target market.

As you can see from the image above, Pinduoduo used Chinese social networks like Wechat and QQ to improve its word of mouth strategy. In fact, in order to access the discounted price, you must find at least one friend to join in the purchase.

This encourages buyers to share links to the item they are buying with friends and family or over social media. This has produced an increase in brand awareness exponentially. Anyone in third tier cities and then successively in first tier cities spoke and continues to speak of Pinduoduo.

WeChat (微信) is a Chinese multi-purpose messaging, social media and mobile payment app developed by Tencent. It was first released in 2011, and became one of the world’s largest standalone mobile apps in 2018, with over 1 billion monthly active users.

WeChat has been described as China’s “app for everything” and a “super app” because of its wide range of functions. That’s why is a fundamental way to reach your consumers, to build a strong brand awareness and to share brand’s value.

Wechat and Pinduoduo are patner and you can easily share a pinduoduo link on Wechat. Actually buyers are encourage to share Pinduoduo content on wechat in exchanges for coupons on give-away. Affiliate marketing at his best.

QQ is another popular messaging app that was Tencent’s flagship product before the advent of WeChat. It still represents the main communication tool for desktop computers and is a very popular brand.

In general, its mobile migration has proven to be quite effective because it offers a viable alternative to WeChat, even though most Chinese people use both. In fact, it’s not easy to come across a Chinese mobile user under 50 who doesn’t have a QQ number.

KOCs (Key opinion consumers) have played a key role in spreading this platform across China. Due to the big use of social platforms in China, and the discounted price which encourages consumers to share links and information to friends, the new platform has had a boom in visits and therefore sales.

In fact, KOCs are consumers like everyone else. They have a few hundred followers and are almost entirely involved in product reviews. They are therefore characters with which it is easy to identify and who inspire a lot of trust in other users. For this reason, some Chinese brands have already made it their ambassadors.

Do you want to know more about How to manage Pinduoduo? Contact GMA a digital marketing agency, specialized in Chinese digital market.