Pinduoduo livestreaming to boost sales of goods on its platform 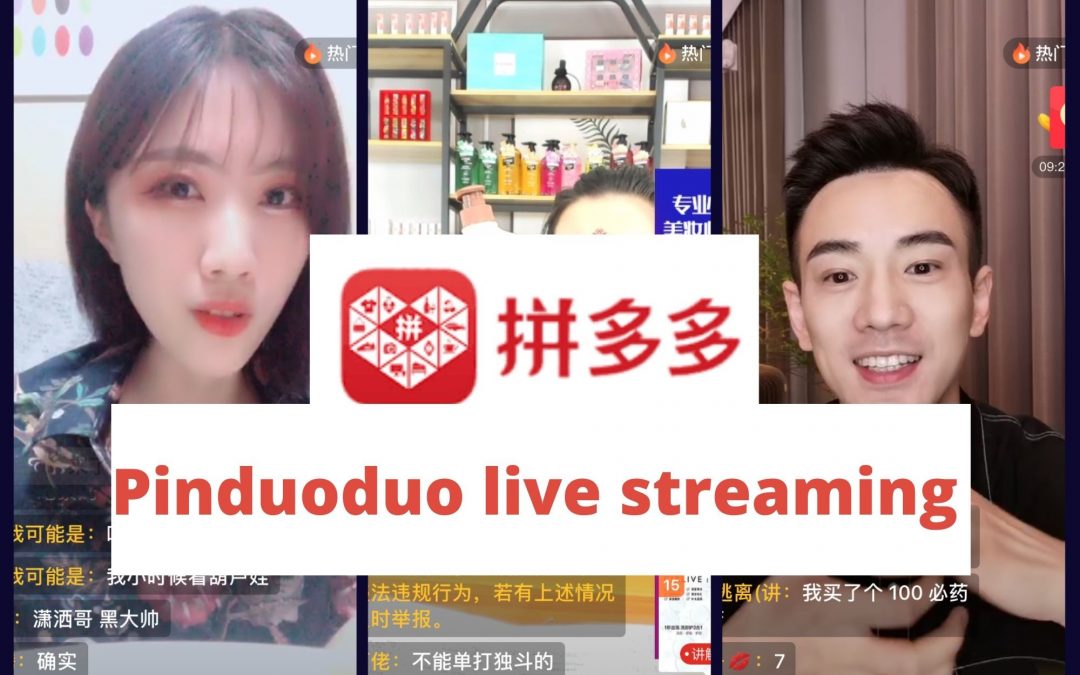 Pinduoduo (拼多多) is today the second most used e-commerce platform in China, as well as the fastest growing app in the history of the Chinese Internet.

According to the most recent data, the spread of this platform reaches 21.38% in 3rd level cities and 35.34% in 4th level cities.

However, it must be specified that, in terms of earnings, JD.com still occupies the second place, sharing with Alibaba also a large part of the revenues deriving from the online market.

The explosive growth of Pinduoduo is essentially due to two main factors:

Thanks to this rapid growth, Colin Huang has become one of China’s youngest billionaires and the 10th richest person in the country with $ 13.5 billion in assets.

Today, 343 million shoppers use Pinduoduo for their online purchases and 60% of them live in the 3rd, 4th and 5th tier cities of the Dragon.

In addition, many international brands such as Huawei and Apple have launched their single-brand stores on the platform, further consolidating the company’s credibility.

The app works slightly differently from other platforms, allowing users to participate in group purchase offers.

More than just a digital shopping platform, it is actually a social e-commerce app, which uses a “team purchase” model and uses social sharing on Chinese social networks, in particular WeChat.

This is a model that applies perfectly to a cashless society like China, where around 583 million people used mobile payment last year.

Using the app is simple. The consumer can buy a full price item or get a discount if he invites other people to participate in the purchase.

Pinduoduo has been intensifying its foray into the cross-border e-commerce industry. The company first launched the business in early 2019, announcing that it planned to work with large suppliers such as Nestle, Unilever, Swisse, Biostime, Gerber.

Pinduoduo historically has focused on customers in lower-tier cities, but that’s starting to change as growth in those areas slow down. Therefore its new cross-border e-commerce business is designed to target more premium customers in China’s Tier 1 and 2 cities, who have more spending power and are likely to be the beneficiary of Chinese economic growth.

Pinduoduo’s channel gives merchants more options than Alibaba and JD.com, and since it’s a new entrant, commercial terms could be better for brands and retailers who elect to sell on the platform.

Pinduoduo has launched a live streaming tool called Duoduo Livestreaming for “partners” who can boost the sales of goods on its platform.

Duoduo Livestreaming has already been integrated into the Pinduoduo app, allowing all its 536.3 million active users to be live streaming partners to promote millions of products listed on its platorm.

To be a live streamer, a Pinduoduo user must undergo a face scan for identity verification, upload copies of the identity card and wait two days for final approval from Pinduoduo.

Those approved are allowed to promote goods during their live streaming sessions and earn commissions ranging from 1% to 80% of the value of the goods.

Duoduo Livestreaming is now Pinduoduo’s answer on how to integrate live streaming into its business after Alibaba’s Taobao has already shown that live steaming is an effective marketing tool.

In mid-May, over one million Chinese consumers tuned to Pinduoduo’s live streaming of its six customs warehouses, located in free trade areas across China. The hosts offered viewers a tour of the internal mechanisms of each warehouse, showcasing popular imported items such as imported milk powder, diapers and more.

The livestream session was designed to stimulate spending for the Duoduo Parent-Child Festival, during which 1.5 billion RMB were provided in subsidies and discounts for products of the mother and child category.

Live streaming as a solution for a reliable platform

Livestreaming helps alleviate some of these concerns, which is why Pinduoduo has come to the point of offering its customers a live tour of its customs warehouses and how operations operate there. This additional visibility offers consumers greater peace of mind as they know that Pinduoduo does not sell fake products.

The importance of livestreaming for Brands

According to a survey from the China Consumer Association, people like this method of shopping because it’s more social and interactive. They can also get a better understanding of a product.

As a result, China’s biggest ecommerce and live streaming platforms have been pouring in to take advantage of the trend. And this year, they’ve been seeing some big results.

Therefore the fusion of ecommerce and livestreaming, known as ‘live commerce’, is a huge and growing trend in Chinese e-commerce.

It focuses on influencers, known in China as key opinion leaders (KOL), who broadcast live to millions of viewers and show products, trying and describing them.

Special discounts are often offered as part of the livestream and live trade broadcasts are known to move record quantities of product in just few hours.

The use of Live streaming could be a big opportunity for brands to increase their brand-awareness and to show their brand’s value to their customers, gaining visibility and increasing sales.

Live streaming are very popular in China and are particularly loved by users for their ability to be transparent and authentic.

In China, many companies integrate live streaming into their internationalization strategies, for their ability to engage large masses of users in minutes. KOLs (Key opinion leaders) are the key that guides the listening.

Companies must focus on growing their brand awareness, especially in this period of crisis due to Covid-19.

Live streaming offers a great opportunity to you to gain visibility, to keep in touch with your customers, to increase your followers and thus increase sales.

Use Kols for your live streaming effort

As We said before, KOLs are the key that guides the listening. Whether you are interested in boosting awareness or generating leads, a KOL can do wonders for reaching your ideal audience.

The social content of influencers in China produces four times the number of views and 8 times the effort than the official accounts of the brand. These characters, therefore, can make their huge number of followers available for a brand to develop effective influencer marketing campaigns.

The goal could be :

However, your KOL search should consist of choosing an influencer that has quality content and deep insights into their viewers.

Rather than spending a large part of your budget on advertising, it is often better to start a targeted collaboration with a KOL.

Once the right character has been chosen according to the criteria described, the type of collaboration must be determined. This can be of various genres based on the goal that the brand sets itself.

Influencers in China usually review products and participate in interviews, events and creative collaborations. They can also take part in the creation of specific collections or be appointed brand ambassadors. All this has a positive effect on brand awareness.

To drive sales and engage consumers, distribution of free gifts and discount coupons through KOLs should be used.

In order to promote your brand and if you have any questions related to digital marketing on Pinduoduo, contact GMA now!