Live streaming Marketing in China will become the norm, here is why 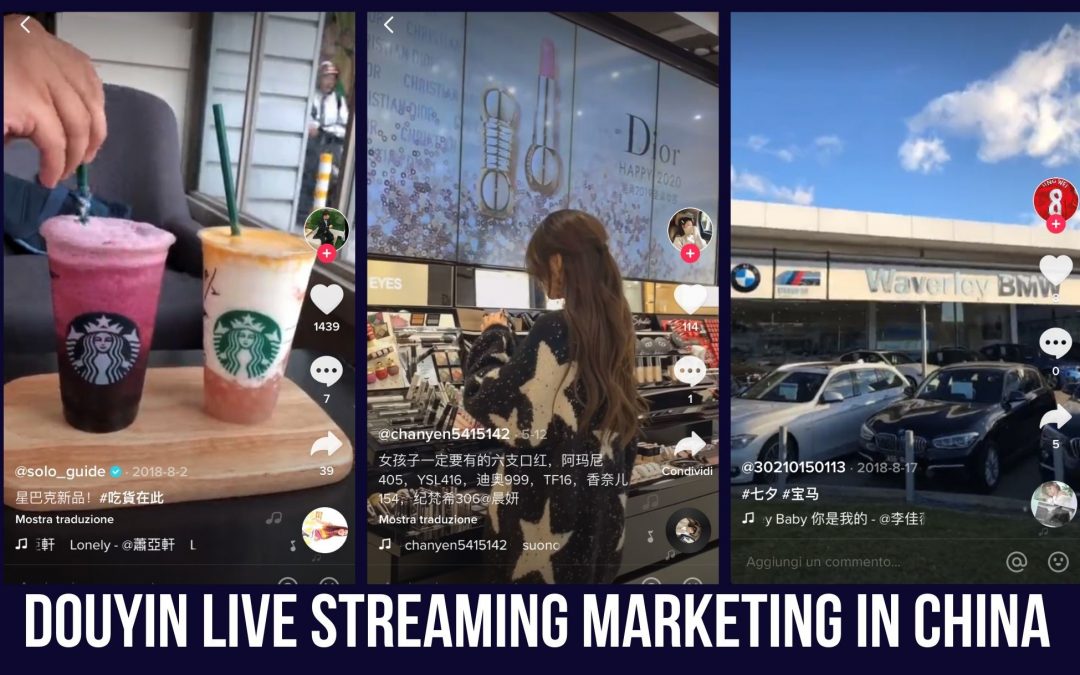 Until a few months ago many still considered live streaming as something futuristic. Despite its undeniable success in China, it was not the first tool on which brands aimed for their digital marketing campaigns.

Then, however, the emergency came from Coronavirus. With the increase of time spent at home, often in front of the smartphone or laptop screen, live streaming has begun to be increasingly exploited.

The number of Chinese producers who started live streaming sessions on Chinese live streaming platform such as Douyin and Kuaishou, increased by 50% during the quarantine period.

What does live streaming mean?

Live streaming refers to the recording and real-time transmission of audio and video content to a spectator. The live streaming platforms were born in China in connection with the gaming industry, but then they expanded to many other fields. These include entertainment, cooking, information and shopping.

The live streaming host can be a KOL (Key Opinion Leader), a KOC (Key Opinion Consumer) or even a simple user. KOLs are Chinese web celebrities, while KOCs are those consumers who have great proximity to their social media followers and greater engagement with it than KOLs.

The contents treated can be of the most varied: from how to combine an Italian wine with a typical Chinese dish to the handcrafted qualities of the furniture.

Why is live streaming important for brands?

A unique way to communicate effectively with your audience and consolidate brand awareness. In this particular historical moment, live streaming can prove to be the winning tool.

Many businesses have taken up the challenge posed by the ongoing global pandemic to accelerate their digitalization. Many of the investments initially designed for offline have been moved to online. All this with a view to reinventing their marketing strategies and consolidating the relationship with the distant consumers.

Hundreds of chefs who cook in their restaurants are now available. Even if it is not possible to go out to eat, in fact, you can order food at home.

Then there are singers who hold online concerts and farmers who show themselves in the act of picking fresh vegetables ready for shipment.

Everything stems from the recent focus on health and the difficulty of many in finding fresh products. The live streaming in this case is proving to be a real turning point for those producers who have decided to make the leap and try this digital solution.

To stay abreast, brands must be able to specialize and improve the content of their live streaming.

It is therefore necessary to start from the quality of the contents to increase the brand awareness and marketing of its products. In fact, users have increasingly sophisticated needs and require fun, informative, useful and well-made content.

Douyin is the winner

As China goes into lockdown, due to the coronavirus, short-video apps like Douyin and Kuaishou have become important channels to interact with the world outside.

Douyin, China’s version of TikTok, users increased by 102% as people self-isolated. Use of Kuaishou likewise leapt 98%. It’s a similar app from Beijing Kuaishou Technology, but predates TikTok and remains more popular in smaller cities as a sort of grass roots TikTok.

Short video app offer a way to gain information about the Covid-19, a way to express creativity and a way to relieve boredom and have fun during the pandemic.

Douyin (TikTok), the short-video social platform developed by Bytedance, has become one of the most popular mobile apps in the world, especially in China. Till the end of 2019, 800 million users in China and 1.5 billion worldwide have been. 75% of users of this platform are Millennials, a generation born between 1982 and 2003 (15-36 years), and mainly come from first and second tier cities. This category represents the China’s new spending force as they don’t hesitate to satisfy their pleasures.

Douyin is the best tool to present a product. Therefore, a business account in Douyin should exploit the link between customer’ daily life and its product, design a dramatic scene to present their relationship and release the magic of the product.

Douyin has often proven to be a strategic ally for international brands in China. Its linear and direct communication, in fact, captures users and holds them in front of the screen longer than other platforms.

One of its peculiarities is the possibility of launching challenges, internal challenges to the App that invite users to join and respond by publishing new content. Often it is the brands that launch these challenges, being mentioned in millions of posts within a few hours.

Kuaishou, with about 300 daily active users, is one of the best known short video apps in China. It is interesting to note that about 80% of its users are very young born after 1990, mostly resident in second and third tier cities and spend an average of 60 minutes a day on the app.

Lately Kuaishou has expanded his interest to e-commerce too. According to data released by the company, 19 million users have made money using Kuaishou channels. We are talking about the short video e-commerce. Kuaishou connects directly to e-commerce platforms such as Taobao, Pinduoduo and JD.

Much of Kuaishou’s success has been achieved thanks to the collaboration with CCTV which has given the short video app the opportunity to broadcast the annual, and very popular, New Year’s gala exclusively. The partnership with CCTV has allowed Kuaishou to reach a large number of users in a short time.

The popularity of Kuaishou among the public is purely given by the high content proposed and the potential profit that can arise. Sellers get the attention of users through short videos and then profit from advertising on their accounts.

In addition, sellers can capitalize directly via live streaming. This also makes it easier to turn the attention of many highly active consumers to themselves.

Through live streaming, on the one hand, consumers can get closer to the product, on the other hand, sellers can show the characteristics of the different products marketed.

A way to gain information

Short videos have been selected as a platform to make a statement by numerous mainstream media. CCTV News and People’s daily, two mainstream media, rank among the top five broadcasts of Douyin, from which it can be inferred that in the prevention of this pandemic, the interaction between mainstream media and short video enables users to gain access to the most timely and authoritative information through short videos.

Douyin offers a live-update section recording the number of infected patients, based on official announcements. The app also shows a geographical map with the reported cases.

In Douyin, resonance is more likely to be evoked by authentic personal stories. Yu Changping, a doctor from People’s Hospital of Wuhan University, was unfortunately infected. In the form of a short video, he shared what he has experienced during the infection and recorded how he has recovered from this illness.

Similarly, intending to get a larger population informed of the life of Wuhan citizens, a netizen filmed the video of “Wuhan evening” to reflect the outbreak in Wuhan, which has been viewed by millions of people. Not only emotional resonance can be aroused by these creations and reports, but also more donations can be encouraged.

The short videos tagged with “Coronavirus” alone have been played 18.25 billion times on Douyin. Among them, the video of “Dr Zhong Nanshan’s suggestion” released by People’s Daily and CCTV, with over 3.55 million views, has been the most frequently commented and reposted.

In this context, the information barriers between mainstream official platforms and short video transmission have been lowered to a certain extent.

A way to express creativity

A digital shift has been created by COVID-19 among creative people, and more users are allowed to be creators by the medium of short video applications. With the emergence of various creative and distributed technologies, users try to re-contextualize the cultural products they consume and create.

For example, the video of “my grandfather doesn’t want me anymore” has been streamed more than 10 million times as of around January 25. During the Spring Festival, the grandson was turned away from the house, with masks and gifts thrown out of the window. Despite an entertaining atmosphere created by these contents, the consciousness of participation and consensus of all viewers have been inspired.

A way to have fun

As millions of Chinese people are stuck at home during the coronavirus outbreak, nightclubs across the country are keeping them entertained by holding “cloud raves” online.

Clubbers have been tuning into video platforms like Douyin, and participating in them virtually.

Some DJs performed live, while others pre-recorded their performances for later broadcast on Douyin’s live, and some ravers even posted videos of themselves dancing to the music at home. These cloud raves have been extremely successful, with millions of viewers tuning into some of these livestreams.

They can also be incredibly lucrative for the clubs. In a livestream that gained 71,000 views, Shanghai club TAXX earned $104,000 in tips from online viewers paying through the app.

Other Chinese companies, such as Alibaba, have now organizing “no meeting concerts” where singers and bands can broadcast their practice matches live. Digital disruption is already happening, and it’s getting people’s attention.

If in the West live streaming is preferred for entertainment purposes, in China it is also exploited a lot in terms of online sales. Hence the happy marriage between live streaming and e-commerce, the so-called live-commerce.

While watching a live stream, Chinese users can inquire about a product and buy it immediately, without ever changing the App. This real-time purchase is promoted by the “See now, buy now” concept used by many brands to increase sales.

For example, a recent Adidas live stream featuring this slogan was used to promote the latest limited edition sneakers in China. The brand came to have 2.23 million views in 10 hours and to invoice 200 million Renminbi in impromptu purchases.

However, live streaming is not a tool to be exploited only for the fashion and beauty categories. Given its enormous expansion, it must also be integrated into its marketing strategy for the other market sectors. For example, other growing sectors are those of home furnishings and fresh food products.

Do you want to know more about How to market on Douyin? Contact GMA a digital marketing agency, specialized in Chinese digital market.